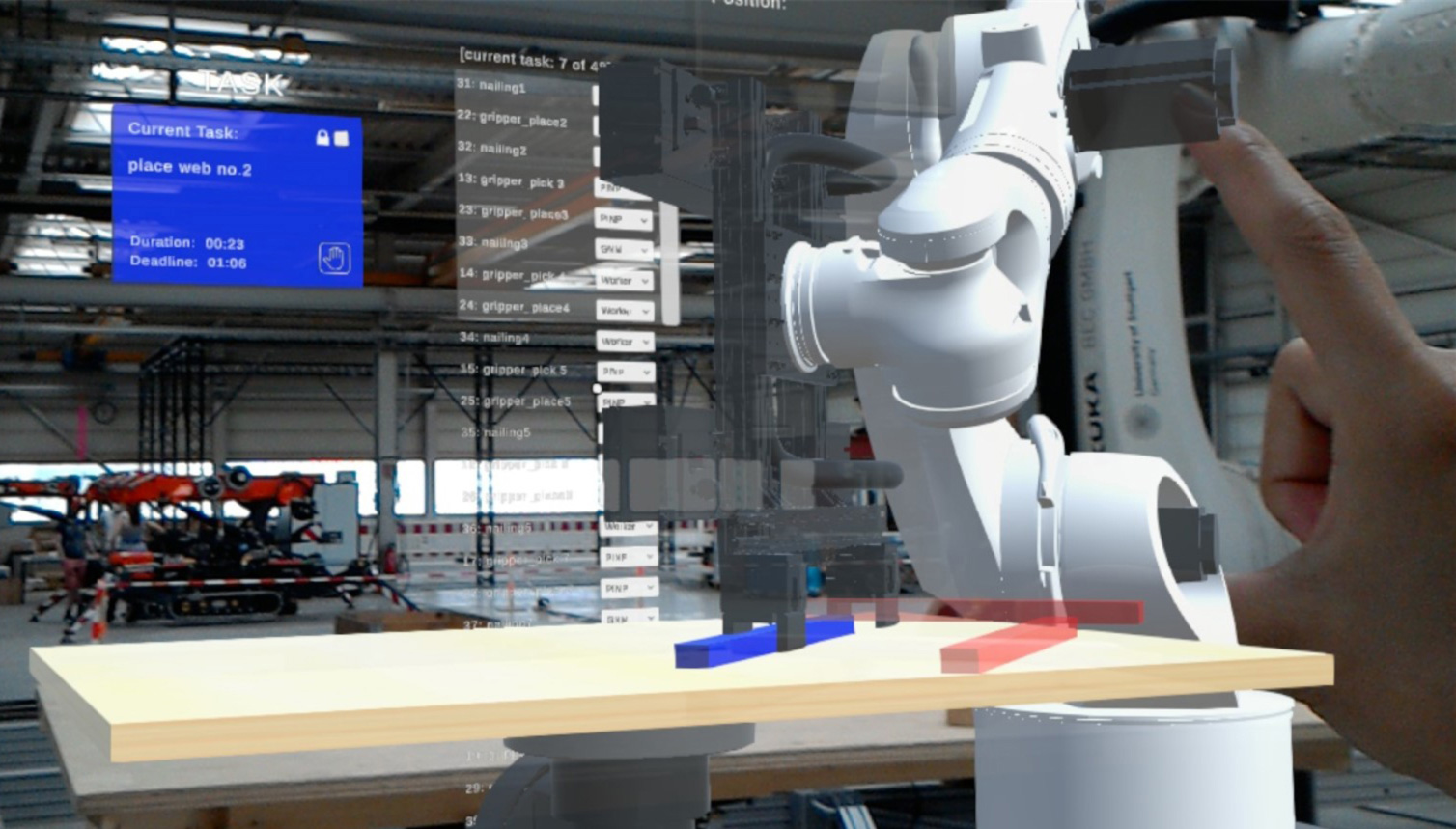 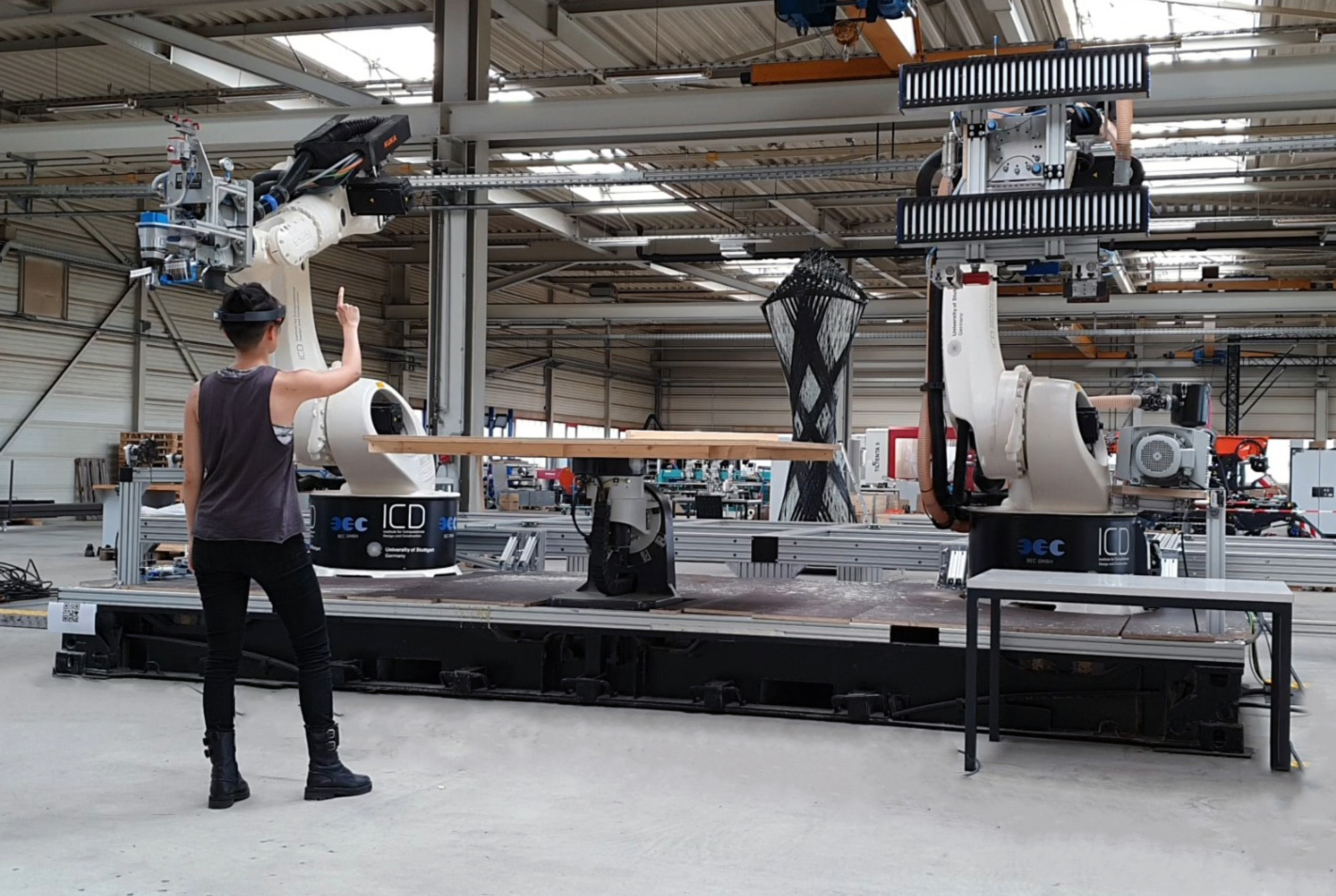 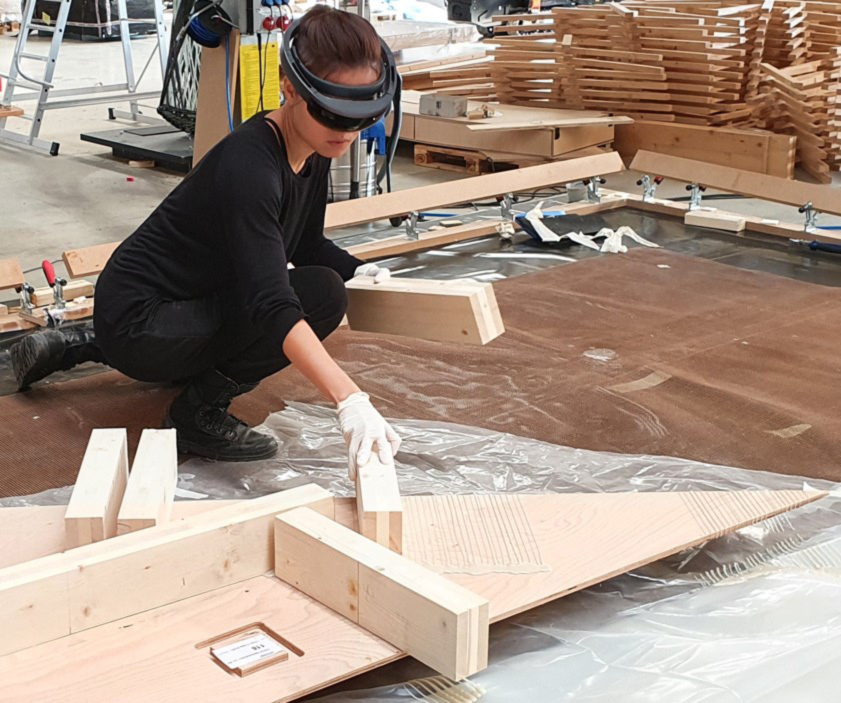 Dr. Felix Amtsberg
is a Postdoctoral research associate at the Institute for Computational Design and Construction. After completing his apprenticeship as a joiner, he studied architecture at University of Kassel and received Master’s degree in 2010. He worked as a Scientific Assistant at the Institute for Structural Design (TU Graz) in Austria and earned his PhD in 2016. Between 2016 and 2019, Felix was working as a postdoctoral researcher at Singapore University of Technology and Design and Massachusetts Institute of Technology. His research interests include novel digital fabrication methods of load carrying structures, made from naturally grown resources and sensory informed human-robot collaboration.
Xiliu Yang
Xiliu Yang is a doctoral researcher at the Institute for Computational Design and Construction. She holds a B.A. in Architecture from the University of Hong Kong and a M.Sc.(Dist.) from the ITECH Master’s programme. Prior to joining ICD, she worked as a computational designer in Hong Kong and co-founded 3DNA, a venture-backed startup with a mission to empower optician expertise and craftsmanship in the eyewear industry. Her research interests lie in the intersection between automated, robotic fabrication and human, skill-driven processes, particularly new opportunities afforded by augmented reality and cyber-physical systems.
Prof. Dr. Michael Sedlmair
Prof. Dr. Michael Sedlmair is a professor at the University of Stuttgart and leads the research group for Visualization and Virtual/Augmented Reality there. He received his Ph.D. degree in Computer Science from the University of Munich, Germany, in 2010. Further stops included the Jacobs University Bremen, University of Vienna, University of British Columbia in Vancouver, and the BMW Group Research and Technology, Munich. His research interests focus on visual and interactive machine learning, perceptual modeling for visualization, immersive analytics and situated visualization, novel interaction technologies, as well as the methodological and theoretical foundations underlying them.
Aimée Sousa Calepso
Currently a PhD student and Research Assistant at Visualisierungsinstitut (VISUS), Universität Stuttgart. She holds a Masters degree in Computer Science from Universidade Federal do Rio Grande do Sul. Her main research interests include situated visualization using Head-Mounted Augmented Reality devices and how we can apply it to Human-Robot Interaction. She also works at the IntCDC, helping to build solutions for the architechture and construction industry involving immersive experiences. She started her research career working with Virtual Reality, having projects awarded in conferences like IEEE VR and IEEE WHC, which motivated her to keep doing research in related areas.
Prof. Dr. Thomas Wortmann
Prof. Dr. Thomas Wortmannis a Tenure-Track Professor for “Computing in Architecture” at Institute for Computational Design and Construction. He received his Diplom-Ingenieur in Architecture at the University of Kassel, where he studied under the pioneering digital architect Lars Spuybroek and Manfred Grohmann, one of the founders of the well-known structural engineering firm Bollinger + Grohmann. After working three years at NOX, Lars Spuybroek’s practice in Rotterdam, he continued his education with a Master of Science in Design and Computation at MIT. In 2018, he received his PhD in Architecture and Sustainable Design from Singapore University of Technology and Design. His PhD thesis received the university’s “Best Dissertation” award. Before joining the ICD at the University of Stuttgart as Tenure-track Professor for Computing in Architecture, Thomas taught at National University of Singapore and held a position at Xi’an Jiaotong-Liverpool University in Suzhou, China. His research interests are the use of computational methods such as optimization, multi-variate visualization and machine learning in architectural design processes. He is the lead developer of Opossum, an award-winning, machine-learning based optimization tool that has been download over 5.000 times.
Lior Skoury
Lior Skoury is a research associate at the ICD. He holds a Bachelor of Architecture from Bezalel Academy for Art and Design and a Master of Science from the Integrative Technologies and Architectural Design Research (ITECH) program from the University of Stuttgart. Prior to joining ICD, he worked as a lead computational designer in the Israeli construction start-up industry at Para-Group and Structure-Pal. There he developed design to fabrication systems for the company’s industry partners. He has been teaching computational design and digital fabrication in Israeli academia in the last few years.His research interests lie in the interplay between data management, data analysis, and fabrication control systems. He is currently working on the application of data management and analysis microservices at RP9 and a Cyber-physical fabrication control and distribution system.

This workshop is fully booked

Extend the knowledge and introduce novel approaches of human-robot collaboration and workflow management with several humans and machines in the prefabrication environment. AR and HRC have gained importance in the AEC environment recently. AR has been used to extend human crafts skill set with the provision of instructions like workpiece location or the assembly sequence, enabling them to execute tasks reliably and without any printed-out plan. Special sensitive low-payload robots, so called cobots have been introduced to support HRC in collaborative assembly tasks. Our research proposes a novel concept to integrate human craft and high payload automation technology (e.g. industrial robots) as collaborative actors and create a highly adaptive prefabrication setup, suitable for the demands of project-based building elements production in the AEC environment. Two important aspects will be discussed. The use of Head mounted AR-Devices to extend the humans skills set, establishes the communication between all actors and coordinate the fabrication workflow on the one hand and the task distribution via a smart server, based on the individual skill set of all actors. After a quick introduction of the concept, hardware and software, the participants will gain some hands-on experience in a case study, where they will using the devices to collaboratively fabricate a timber object, followed by a discussion between participants and instructors.

Notebooks should be brought by the WS participants.

Discussion of use cases for robust automation in manufacturing and AEC, comparison of different approaches to their empirical investigation, case comparison and deepening of conceptual understandings.

The workshop’s objective is to give an overview of an interdisciplinary process of inspiration for novel concrete structures reinforced with carbon (textiles).

Go to workshop
Workshop #6 – Additive Manufacturing in Construction: In situ Retrofitting Using AM with Mobile Robots
This workshop is fully booked
11.10.2022 – 9:00 am to 06:00 pm,
lcrl waiblingen
Manufacturing

In this workshop we aim to experimentally explore whether the deployment of mobile robots on building sites could be utilized for retrofitting, customized renovation, or repair by applying in situ extrusion 3D printing technology.

Go to workshop
Workshop #7 – participation in the Conference „Adaptive Skins and Structures for the Built Environment of Tomorrow“
11.10.2022 – 9:00 am to 06:00 pm,
Breitscheidstraße Hörsaalprovisorium room M2.02
CRC 1244 results about adaptive skins and structures.

The Conference „Adaptive Skins and Structures for the Built Environment of Tomorrow“ provides insights into the works of the Collaborative Research Centre 1244 with a focus on the world’s first adaptive high-rise building!

The workshop’s objective is to find matching points between participants’ ongoing research, to explore ML methods that can solve integrative computational design and construction challenges, and to increase the synergy between students from different disciplines.